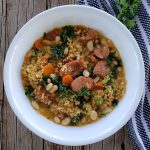 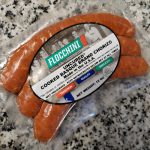 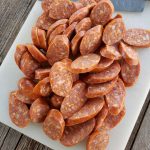 This might not be a traditional cassoulet (classic poor man’s meal)!  It’s beans slowly cooked with sausage so that the rendered fat has time to soak in and give everything the most amazing flavor.  This recipe adds kale instead of Italian parsley, which isn’t traditional in cassoulet – but adds a new dimension in flavor and of course for color!  This dish has deep, rich flavor with just a few simple ingredients, but tastes like a million bucks.